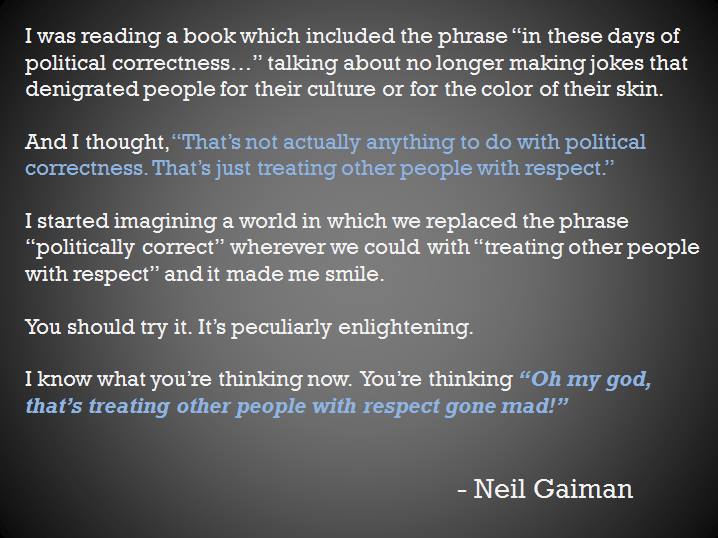 As much as I admire and respect the work and words of Neil Gaiman, this meme that is said to be quoting him (I have not verified that this is the case) is half right.  It is only half right because there are two kinds of political correctness.

The first kind, “treating people with respect,” is a very worthwhile impetus: treating people in ways that demonstrate we truly value and respect them and what they have to say is something we should do all the time, regardless of who they are. I see this kind of “Political Correctness” as one important way of living Christ’s command to “love thy neighbor” in everyday life. So, in this light, Neil Gaiman is absolutely correct.

But then, there’s the second kind of “Political Correctness”…

The second kind is that of “not making waves” or “avoiding controversial terminology.”  We see this form of Political Correctness all too often, perhaps more often than the first (sadly): this second kind dances around areas of disagreement and pain as a means of pretending they are not there and need not be discussed, misusing the mantra of “Political Correctness” as an excuse for avoiding talking about inconvenient or uncomfortable truths. It is a form of political correctness that says silence is best – a silence that all too easily becomes a tool of oppression, and which therefore is NOT okay in any way, shape, or form.

When it comes to the first type of Political Correctness, I aim to be “politically correct” all the time.  Although, being human, this often an aspiration, not always a reality.  In such cases, people will think me crazy, as Mr. Gaiman says.  I’d rather act out of love and be seen as Crazy than conform to the mainstream out of the fear of being seen as different.  After all, those hurt by thoughtless language and terminology are those who are different.  Jesus is the God who walks with us – Emmanuel – so, how can I not do the same by walking (and speaking) in solidarity with those who are marginalized?

When it comes to the second type, may I never be anything but “politically incorrect!”  In which case, I’ll be seen as both rude and crazy in the eyes of many.

Copyright (c) 2015, Allen Vander Meulen III, all rights reserved.  I’m happy to share my writings with you, as long as proper credit for my authorship is given. (e.g., via a credit that gives my full name and/or provides a link back to this site.  Or, just email me and let me know!)