We’re paying our Congressional Reps and Senators a handsome wage and even better health and retirement benefits to look out for us; so, it’s about time they got serious about doing the job we’re paying them to do, and fix this mess – so that we can have some modest assurance of financial stability in our retirements, too. 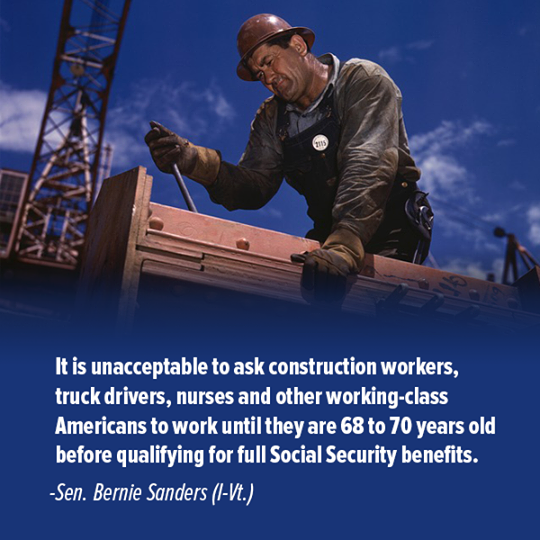 I agree with Bernie on most issues. Not quite so sure about this one.

There are really two gaps that need to be addressed:

First, Social Security in general is underfunded and additional revenues absolutely must be found if it is to remain solvent. The solution is clear and incontestable: raise the limits on how much of one’s income is subject to the Social Security tax; and perhaps even raise the rates, especially on those who have large incomes.

Second (and as is at the heart of this proposal) it has always been assumed that the taxes paid by workers retiring in the future would fund the Social Security benefits of those retiring now.  (Which further assumes that there will always be a significantly larger pool of those still working compared to those who are currently retired.)

These assumptions are no longer true: people are having fewer kids and are living longer, so there are simply fewer people to fund Social Security for those now retired (or soon to retire). The reserves that have been built up in the 80 years since Social Security was established were intended to smooth out and secure the fund’s cash flows over time, but were not intended to address such major demographic shifts, and so are rapidly dwindling as a result.

Simply raising Social Security taxes will help with this gap, too, but I am not sure that doing so will fully resolve the problem; and if not done right, will unfairly burden those with lower incomes. Further, and as this meme points out, is it fair to change the rules of the game on folks who have been working for decades under the assumption that Social Security would be there for them when they retire? I think not. Another possibility would be to curtail or eliminate benefits for those with large amounts of financial assets available to them in retirement.

So, should we raise the age of eligibility for Social Security benefits? I’m not sure, but I don’t think we should count it out entirely.  At the very least, it is not unacceptable to consider that those who will retire 30 or more years from now may need to work a year or two longer, especially if they are still in good health.  Back in the 80’s, the age limits were raised for those of us in my age bracket in exactly this way.  Why not do it again?

What is true is that the longer Congress diddles around without fixing this problem, the worse it will get, and the more burdensome the fix will be for those of us who will be relying on social security in our retirement.  We’re paying our Congressional Reps and Senators a handsome wage and even better health and retirement benefits to look out for us; so, it’s about time they got serious about doing the job we’re paying them to do, and fix this mess – so that we can have some modest assurance of financial stability in our retirements, too.

Copyright (c) 2015, Allen Vander Meulen III, all rights reserved.  I’m happy to share my writings with you, as long as proper credit for my authorship is given. (e.g., via a credit that gives my full name and/or provides a link back to this site – or just email me and ask!)

3 thoughts on “Raising the Age of Social Security Eligibility?”