There is no need to sling mud at Ms. Davis – she’s no more flawed than any of us. There is no need to parade her in front of the cameras as a paragon of Christian Virtue – she isn’t, any more than we are. … We need to stop making her into something she is not. Instead, as Christians, we are called to hope and pray that she will come out of this experience without wrecking her life, and with a deeper and fuller appreciation of what her faith means to her, and how better to live her faith in compassion and love. 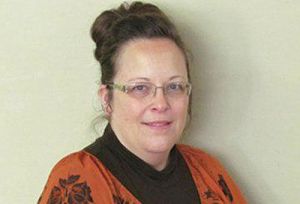 By now we’ve all heard about the Clerk of Rowan Country Kentucky, Kim Davis, who has refused to issue marriage licenses because she cannot in good conscience sign her name to a marriage license that, in her mind, violates God’s command that marriage is to be a heterosexual union between a man and a woman.

There has been a whole lot of very personal and nasty invective spewed in Ms. Davis’ direction because of this. Factually, most of it is true: she herself admits that her life was a mess until she began attending church about 4 and a half years ago. But does the fact that she has a checkered past matter?  No.  What matters is that she is a faithful person, trying to live out her faith as best she can. That needs to be respected.  We need to remember that digging up such old dirt to throw at another runs contrary to Jesus’ words in Matthew 7:3-5: “Why do you see the speck in your neighbour’s eye, but do not notice the log in your own eye? Or how can you say to your neighbour, ‘Let me take the speck out of your eye’, while the log is in your own eye? You hypocrite, first take the log out of your own eye, and then you will see clearly to take the speck out of your neighbour’s eye.”

Now admittedly most people now see her faith stance as being on shaky ground – as do I.  But this point is actually irrelevant to the discussion since the issue is not about what she believes, or even how she enacts her beliefs in her private life. Those who make her beliefs central to the discussion are doing her, themselves, and the public a disservice by trying to fight again a battle that is already over and done with.  The U.S. Supreme Court’s quick rejection of her emergency petition made that abundantly clear.  So, we must understand that the politicians and other public personalities who are taking up her cause are being very crass: seeking to heighten their own fortunes by associating her name with their own, since they already know the legal issue is settled, and that nothing she or they do is going to change that.

Kim Davis has become a caricature, a tool of those on both the Left and the Right who care nothing for her, but only want to advance their own positions in the ongoing “culture wars” by holding up their false characterizations of her as a standard to be rallied-around.  Very soon the journalists and cameras will move on to some new battle in that war.  The politicians will vanish, and those protesting against (or supporting) her will move on as well.  She will be left alone in a prison (whether figurative or real) of her own making – without resources, without a job, and quite possibly a pariah within the community where she has lived her whole life.  Very sad.

I’ll illustrate the real issue here using some parallels: When a military draftee or active duty soldier refuses to perform their duties, they are not allowed to continue in their position because, quite simply, they are not doing their job – they would become “Conscientious Objectors” and assigned some other task (albeit one that is not likely to be either pleasant or easy).  Similarly, if a Police Officer refused to perform their own duties because their newfound faith says they must not participate in violence, they would not be permitted to continue working as an Officer of the Law, and would be given an alternate assignment (or asked to resign).  We expect those who serve the public to fulfill their duties regardless of their personal feelings.

So, the real issue is that Ms. Davis is refusing to perform her duties as an employee of the State.  As such, her decision is to either find a way to faithfully perform her duties, or resign.  There is no other alternative.  This is all that the courts are saying: do your job, or leave.

There is no need to sling mud at Ms. Davis – she’s no more flawed than any of us.  There is no need to parade her in front of the cameras as a paragon of Christian Virtue – she isn’t, any more than we are.  She’s already said that she is having a hard enough time as it is, dealing with notoriety she did not look for and does not want.  We need to stop making her into something she is not.  Instead, as Christians, we are called to hope and pray that she will come out of this experience without wrecking her life, and with a deeper and fuller appreciation of what her faith means to her, and how better to live her faith in compassion and love.

Copyright (c) 2015, Allen Vander Meulen III, all rights reserved.  I’m happy to share my writings with you, as long as proper credit for my authorship is given. (e.g., via a credit that gives my full name and/or provides a link back to this site – or just email me and ask!)