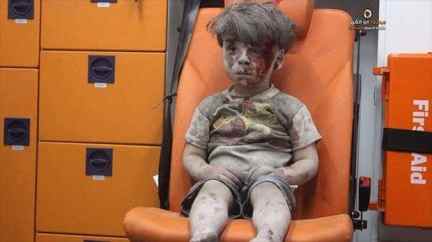 It’s at just about this point in every election cycle, especially this one, that I realize the entire world is mad and doomed to certain destruction and that there’s nothing I can do about it: Frustration, Anger! How can supporters of that other candidate be so stupid?!? Can’t everyone see that it will be Armageddon if the other party wins on November 8th???

And I don’t think I’m alone on this; no matter whether our favorite color is Red, or Blue; or even Yellow or Green.

Please join me in prayer…

O God: the rancor, spite and anger is getting worse every day. Each new revelation is more extreme and painful than the last. Lord, help us embrace your hope and experience your peace. Help us speak your words of love, tolerance and compassion for all. May we perceive your will through the words spoken here today. And, may your plan for healing and restoration for all be made manifest through us in the days, weeks and months to come. Amen.

This week, trauma has surrounded and overwhelmed us: a hurricane and tremendous flooding in the Southeast US and the Caribbean. News reports about the ever-worsening horrors in Syria and Yemen. Then there’s the destruction of Native American sacred sites to make way for an oil pipeline of all things: traumatizing a people who have suffered so much for so long. But most of all, there’s the trauma reawakened in so many as a result of the divisive and hateful rhetoric being spewed in the name of making this country great again.

The issue we’re confronting this morning is trauma, not politics. I’m not here to endorse one party or one candidate over another. I’m a Liberal, as you all know. But, I believe very strongly that many voices, including those of Conservatives of all stripes, are critical for the proper functioning of our democracy. We need each other. Without a multiplicity of voices involved and invested in our political system, we will not achieve a balance that is workable for anyone, let alone everyone. In a democracy everyone gets a bit of the pie, no one gets it all.

Remember that the root word of politics is “polis” – the Greek word for town or community. Politics is about living and working together for the good of all, not a scorched earth battle for the unchallenged supremacy of one over another.

I’ll begin our Sermon this morning with some background on our reading in the Book of Jeremiah. At the time it was written in 588 BC; Jerusalem was surrounded by the armies of King Nebuchadnezzar, who was determined to ensure the Jews would never again rebel against the Babylonian Empire.

Jeremiah is witness to the trauma of his people as they try to make sense of the destruction and death they now know they cannot escape. They thought they’d done well in their renewed devotion to their faith that started under King Josiah. And this was true: their nation and faith had experienced a great renaissance years since then. Everything was working as it should.

But now it’s all coming to an end. They’d rebelled against Babylon’s oppressive demands for tribute, believing in Egypt’s pledge to protect them, but the Babylonians came anyway; and neither Judah’s army, nor the Egyptians, nor God, stopped them. They’ve surrounded the city for many months, and the end is near. The people are frightened, desperate – wondering where the next missile that comes over those walls will land, wondering what will happen to their children. There is no more food. They’ll soon die of starvation or disease or from Babylon’s swords and spears. It is during these months of darkness, of doubt, of fear and never-ending trauma, that Jeremiah wrote this passage. He is trapped in the city, starving alongside his fellow believers.

And the people wonder if the old proverb: “The parents ate the sour grapes, but the children got the sour taste” is true. Maybe Divine Retribution does descend upon the children and grandchildren of those who fail God. Maybe all their hard work and trust in God was doomed from the start. Maybe, just maybe, the Covenant they thought they had with God is just a worthless delusion.

For forty years, Jeremiah tried to shake the people out of their complacency before it was too late. And now they all realize that what he’d been saying all along is coming true. Then, suddenly, this man whom everyone had laughed at and ignored for so long, changes his message to one of compassion and hope.

He says “No, ‘Instead, those who eat sour grapes will have their own teeth set on edge; and everyone will die because of their own sin.’”   In other words, we are not responsible for the sins of others, not even for the sins of those who came before us.

Jeremiah is saying that God calls us to atone only for our own failures; that God will not allow us to escape responsibility for them. We cannot blame our victims for the crimes we commit against them. We cannot blame those who rebel against our oppression. We cannot label protestors as criminals when we don’t allow them equal access to justice under the law. We can’t dismiss or ignore the pain and anger of those protesting our bulldozing of their ancestors’ graves. We cannot blame the poor for the effects our greed has upon them. And, we cannot ignore how our reckless exploitation of this world is causing severe and irreversible damage to so many people in so many places.

The truth is neither easy nor fun to confront. Jeremiah’s words show that we really are responsible for our own destruction. We have failed, not someone else. We cannot save ourselves. So, from where will our salvation come?

And, we see despair everywhere in our world today. Like the Jews back then, we at first believed that salvation from our troubles was possible if everything went exactly as we were sure it must. But now we realize things cannot turn out as we want them to. We might by some miracle survive the present turmoil, but that will only postpone the inevitable. We’re doomed, just as they were. We will die for our sins. And until then, the trauma that so many of us live with each day is being made worse with each new revelation that arises from the evils of this world and the evil within our own hearts.

So, God must be angry at us for what we’ve done wrong. But, what did we do wrong? We were so certain we were on the right path, doing God’s will. Where have we failed? These are the same questions that were being asked in Jeremiah’s time.

And the answer is, it doesn’t matter.

Yes, what they do or say is hurtful, perhaps illegal, even evil; and so we rightfully conclude that we do not want them to be our President or our Senator or our Governor. But ultimately, as author J.K. Rowling wrote just earlier this week: “It’s not about who they are, but about who we are.” We are not called to judge them or change them, but to know and to change ourselves. We must look into our own hearts and see if we are what God wants us to be. It doesn’t matter to God what we do. Because doing is the problem: we’ve done enough.

Jeremiah names the solution to our shared brokenness and failure to love the other as God loves us. Here in the moment of the greatest darkness and doubt of his people, he writes: “[God’s] new covenant [is] this: I will put my law within them and write it on their hearts. I will be their God, and they will be my people. … I will forgive their sins and I will no longer remember their wrongs.”

There are no conditions, no prerequisites, to this new covenant with God. There is nothing we need to do. God doesn’t remember our sins. So why point out those of others? It won’t do any good: God isn’t remembering their sins either, and won‘t.

God’s law is written in our hearts; it is living within us. We are God’s people. That is who we are. God has already forgiven the sins of Crooked Hillary and Evil Donald; and even forgiven the sins of all who follow of them – including us. We are not called to condemn anyone, but to join together and heal the pain and reawakened trauma that so many are suffering. We must never forget the anger and the rage and the hate that hits them and us again and again, every time we turn on the TV or hear the radio, or read an email, or listen to the chatter while in line at Starbucks.

Jeremiah said that the equation is not what we thought it was: God’s grace does not depend on how good we are, nor how good we are compared to anyone else. This is not a race. …Not even a Presidential one. It’s about whether we can come to love each other fully and without reservation. It is not about what we do, nor about who they are, but about who we are.

God has already made our hearts clean and pure. So, the question really is whether we will allow God’s new covenant written upon our hearts to function and manifest itself in our lives, as God intends. Will we allow ourselves to see God’s presence in others? Will we respond to that presence?

Those we have forever unfriended on Facebook will still be with us long after this election season ends. And yet, the trauma being inflicted upon those whom we love will not fade, even though it may be buried again. It is that trauma, and what results from that trauma, that God is concerned with.

After all, the great battle of Armageddon happened 20 years before Jerusalem was surrounded by the armies of Babylon. Jeremiah and his people had already survived the crisis that ended their world! And, they would survive their present crisis, just as we will survive ours.

Jeremiah declares that we are not responsible for the wrongs of neither our ancestors nor our descendants; but only our own. Are we loving others? Are we sensitive to the hurt and trauma that our words trigger within our neighbors souls? Are we aware that the pain and anger and fear they fling at us originates in the pain and anger and fear we fling at them? Are we good caretakers of God’s Creation and all of our fellow human beings? When others see our actions and hear our words, will they understand who we really are? Will they see God in us?

That is what matters.

That is all that matters.

A posting containing most of the material presented in the worship service is here: ARK Community Church 10/16/2016, “A Clean Heart”

Copyright (c) 2016, Allen Vander Meulen III, all rights reserved.  I’m happy to share my writings with you, as long as proper credit for my authorship is given. (e.g., via a credit that gives my full name and/or provides a link back to this site – or just email me and ask!)

One thought on “Sermon: A Clean Heart”