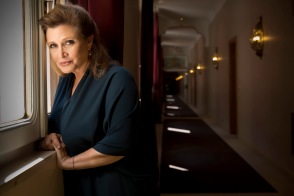 It was the Spring of 2002; and Lucasfilm was hosting “Star Wars Celebration II” at the Indiana Convention Center in Indianapolis.  My [then] wife, daughter and I travelled there in our camper: joining 75,000 or so other people to celebrate all things Star Wars, and especially the upcoming release of Star Wars “Attack of the Clones.”

My 13 year old daughter was a huge fan, and had been preparing for this trip ever since we first heard about it, developing her “Jedi Jaina” character: purple and black hair; lavender costume, purple light saber.  She’d written a script and put together a sound track as the background for a solo performance at the talent show that would be part of the convention’s many events, and hosted by Anthony Daniels. (I was the voice of Yoda for her sound track: the worst Yoda voice-over ever!)  Even though she did not win the talent show contest, her pluckiness and costume were a huge hit.  And, she got to give Mr. Daniels a big hug in front of about 5,000 people.  I was so proud of her: her dreams had come true.

But most of all, she really wanted to meet Carrie Fisher.  As I recall, Ms. Fisher was scheduled for two or three “meet and greet” autograph sessions.  I remember being told that she was battling fatigue and muscle cramps or spasms from sitting and writing so much.  But even so, she added more and more of those sessions, and extended them, to accommodate as many of her fans as she could.  Many times the line was opened, then shut down when it became too long, then opened again after Ms. Fisher had a chance to rest.

My daughter kept on going back to that line again and again, but could not get in.  Finally, she was assured by a manager that she would have a guaranteed spot in the next session if she showed up again at a certain time that afternoon, when the next session started.

And so, we made sure we were there.  No line: the session had been cancelled because Ms. Fisher needed to rest again.  This had been her last chance to meet Carrie Fisher, and so my daughter was devastated.

Ms. Fisher heard about all this, and sent the manager out to bring my daughter into the small room where she was resting.  So, my daughter was able to meet Ms. Fisher and chat with her, one on one, for about five minutes.  During that session, my daughter told Carrie that she dreamed of someday being just like her.

I can just imagine the emotions this statement stirred up in Carrie Fisher, who’s relationship with Hollywood and its’ self-centered universe was always very problematic.  She knew, far better than my daughter did, what being caught up in that hedonistic culture would do to a young and naive midwest girl.  And, her own daughter, Billie Lourd, is just three years younger than my daughter.

And yet, Ms. Fisher smiled, told my daughter that she hoped her dreams would some day come true, and wrote “To my dreamy Elizabeth” on the promo photograph she then gave to Elizabeth.  She knew the truth, but she also knew that sometimes the dream is more important than any truth can ever be.  She knew how precious and fragile dreams can be, how easily they can be frustrated, twisted, and destroyed by an uncaring and self-centered world.  And so, she chose to handle my daughter’s dreams with care and respect.  She chose to nurture my daughter’s hopes and dreams, rather than smash them with reality.

A gracious, wonderful, wise and beautiful person in every dimension.  I will miss her; and I will miss her deep love and respect – not just for her fans, but for all people and for the challenges and pains of life they face here in our modern world.  And yet, my own tears and sadness over her passing are nothing compared to the huge hole she leaves in the lives of so many of her friends, colleagues and family: most especially in the life of her own daughter, Billie.

My prayers are with the Fisher family and with all who knew and loved Carrie Frances Fisher: may the love and dreams and hopes she inspired in so many others continue to grow and bear fruit; and may her own dreams and our memories of her and all she that stood and fought for never die.