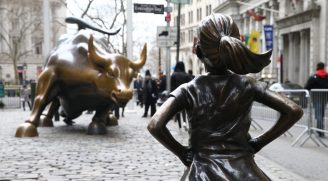 A bit of a kerfluffle has erupted in the last few days over the “Fearless Girl” sculpture on Wall Street in New York City, created by Kristen Visbal.

As most of you know, on the morning of International Women’s Day, “Fearless Girl” was set up facing (and, in fact confronting) the famous “Charging Bull” sculpture on Wall Street.  “Fearless Girl” is intended to make it clear that the time of Wall Street and major firms being a “mens’-only” club is over.  Women have long deserved the right (as well as convincingly earned the right) to have an equal role in the leadership of this nation’s business community and its many firms and organizations.

Now, the artist who created and installed “Charging Bull,” Arturo Di Modica, is taking offense at the way “Fearless Girl” changes how the public looks at his own work.  He wants “Fearless Girl” removed, and is suing the City to try and force this to happen.

But really, is this a reasonable argument?

“Charging Bull” was a piece of guerrilla art itself, secretly installed one night after the Stock Market crash of the 1987.  The artist saw it as a symbol of prosperity and strength.

But, it has also become a symbol in the years since of the dominance of capitalism and forcefulness of American business.

And that’s precisely the problem…

Like any work of art, over time layers of new meaning are being attached to “Charging Bull.”   Its meaning to those who see it and know of it in the here and now has expanded in many directions, many or most of which are not likely to have been anticipated or intended by the artist when they first created the work.

No work of art is owned by the artist once they release it into the world.  It becomes part of all of us in some way, and so its symbolism is subject to what we put into it and take out of it.  We have the right to interpret any work of art as is most appropriate for us and our own perspective; and we also have the right to challenge the perspectives of others, as “Fearless Girl” does.

“Charging Bull” is a symbol of strength and dominance, of male dominance – or at least representing qualities typically seen as “male.”  (After all, Bulls are male.)  And, it speaks to many of what Wall Street is today.  But, is that the Wall Street we want or need in the future?

Reflecting on whether the symbolism of “Charging Bull” is still appropriate, and challenging its claim to being reflective of what American business is (and should be), is what “Fearless Girl” is all about.  Both are attempting to define the path we take into the future.  Shall we rely on what has always been as we charge ahead into the future?  Or, should we challenge the “powers that be” for the good of the many whom the old status quo ignored; and in the best interests of all?

In my experience, Charging Bulls are often interested only in their own agenda, and unwilling to grant that others have a right to be heard, too – let alone listen to others.  (We certainly see this in today’s political and economic environment.)

I do not believe that the America of the Charging Bull is where our path into the future lies.  We are not a nation that can kick those without power aside, just because they don’t have power.  And as far as I can tell, every time we try, we eventually come to regret it.