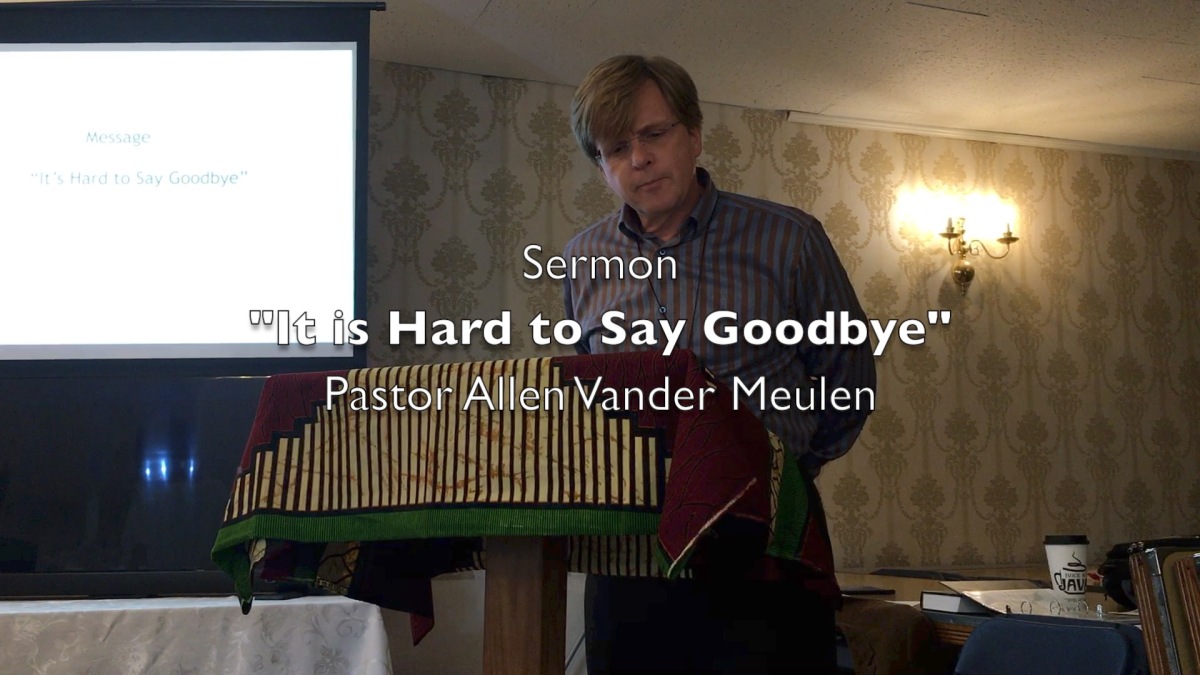 We all say goodbye in many ways and in many different settings: the death of a loved one; the loss of a job or a retirement; College Graduation; the birth of our first child; the end of a relationship. All of these mark the end of one chapter in our lives and the start of another.

Saying “Goodbye” recognizes that something we value, something that is essential to who we are right now, is ending.

Most of us have had to say “Goodbye” to loved ones who died. And someday, those we love will say Goodbye to us when we die. With death, all that we are slips beyond human grasp. All that is left of us here in this world are the memories of those who knew us – good memories and bad; memories that those who love us will carry with them as they move forward into their own future.

Death means saying goodbye to those we love.

The loss of a job or a retirement is another way of saying goodbye: it marks the end of a way of life or a career. We must say goodbye to the friendships and the community and sense of self that are all wrapped up with that position. We are no longer a teacher, or a manager, or a police officer, or a writer – or a preacher. Part of our identity dies, and will never come back again in exactly the same way.

Leaving a career means saying goodbye to a big part of how we see ourselves, and what defines our place in this world.

College Graduation is another way of saying goodbye. …Yes! School is done! But what now? Get a job?? Be responsible?? Rent an apartment and get a car??? OMG, I have to “adult” now??!!  …Nah, I’ll just move back in with my parents!

The birth of our first child is a Goodbye, as well. They depend on us for everything. Our life changes: we can no longer work an insane number of hours each week. We can no longer stay out late at the bars, or go to a movie or ballgame on a whim. Finding babysitters and making sure we have an adequate supply of diapers becomes essential to our sanity.

Having a baby, and getting married too, means saying goodbye to living life purely on our own terms.

As I said in the Message for All Ages, the most painful goodbye I will ever have was having to say goodbye to my daughter twelve years ago, when she was 16.

That experience has given me an appreciation for how a veteran must feel when someone says to them “Thank you for your service.” Or when someone who suffers a great emotional loss or injury is told “time heals all wounds.”

Saying Goodbye to anything that is central to how we conceive of ourselves is still a Goodbye.

Now, such words of assurance are well-intentioned. And, we who are mourning such Goodbyes know this, and accept them as such. We also know those who say such things mean well, and are trying to reach out to comfort us. But, such assurances are far from adequate, and will never salve the pain inside of us. On the other hand, I don’t think it’s wise for such pain and loss to be left un-acknowledged. It is we who need to say goodbye to who we were, and what we’ve lost. The pain is ours. Others may support us or comfort us, but they can’t say goodbye in our place.

Goodbyes can be very complicated.

Our reading from the Gospel of John is part of a very long passage following the Last Supper, where Jesus is telling his disciples Goodbye. He loves all of them, but their relationship will never be the same after that night. It’s complicated. He struggles to find the right words, just as we do. He knows his words are inadequate, just as we do. He knows they are unaware of what is to come in just a few hours.

Jesus is human; he’s feeling pain, and uncertainty, and fear. He sees the impending losses. Many things precious to him and to those whom he loves are about to end forever. And yet that which must come to pass; which must be born and then mature, cannot do so unless these Goodbyes occur.

The disciples are confused.   They’re upset by his words. They have no idea what he’s talking about. Their words and their questions make this clear. At the start, Jesus says he will be leaving them and that where he is going they cannot come. And so Peter asks, “Lord, where are you going?” [John 13:36]. Then, near the end (three chapters later) Jesus says, “I came from the father into the world; and now I am leaving the world and going to the Father.” Aha! His disciples reply, “Now you are speaking plainly! [FINALLY – man, these prophetic types can be so irritating!!] … We know you know all things, and do not need to have anyone question you.” (John 16:28-30).

They hear his words, but it isn’t sinking in. They certainly know that powerful men are after Jesus. After all, they are in hiding. But, accepting the reality of the immanence of his departure from life is beyond them.   …Maybe they’re afraid to ask.

Goodbyes can be scary.

And certainly this was true for me. Back in the summer of 2005, I knew that the day when my first marriage would die was inevitable, and soon. I felt like I was in a dungeon, and the jailer had thrown away the key. But, I couldn’t look at these facts straight on; let alone look past them. There was a wall across my future. I knew it was there. I knew I had to get through it. But, I had no idea how it would happen. And, I had no one to turn to at that time, in what was my darkest hour.

I was certain something had to change, that something had to die. I later said to some that I felt like I was about to die, at least in a spiritual sense. But, I was wrong – I couldn’t avoid this death. And, what had to die was not just the relationship, but me too (or at least me as I was at the time). I had to let go of my life as it was. Letting go of something that is part of us, even when it’s killing us, can seem like death.

I see these same emotions, thoughts and fears working within the disciples during this Last Supper dialog. Thinking or talking frankly about what was happening was something they just could not do. They did not know where to turn, or who to talk to. And, they really didn’t want to directly question Jesus about it. It was all too painful and scary to deal with. It was much easier (and safer) to break the bread, have a few drinks, and swap some good stories.

And yet, despite their reluctance to admit to themselves what was about to happen (like me); somehow they knew it had to happen. They knew that things could not go on as they had. They knew there had to be a change.

But, we can’t just keep on collecting more and more “past” to drag along with us as we journey through life. It distracts us, it tires us, and it will eventually overwhelm us. To have a future, sometimes we have to let go; we have to say goodbye. And, what we’re saying Goodbye-to often matters a great deal to us.

And so, our Goodbyes are not easy. There is no way past the walls across our future unless we first let go of the things we have outgrown or which we no longer need. And sometimes, the cost of that is almost too much too bear.

Jesus knows this. He sees our confusion. He already knows all about that dark wall that we cannot see past. He knows our misplaced hope and understands our secret frustrations. He feels our pain. He knows our isolation and our fear. And out of all that understanding, he offers words of comfort, knowing that the words themselves are inadequate for the moment. And, he knows that his words will for a time lead to greater darkness and confusion and pain and doubt. But he also knows that those same words will bring clarity and hope in time to come. His words teach us that he cares; even if we don’t care, to know, right then.

Sometimes Goodbyes are bigger than they seem to be. Sometimes a flippant farewell is all we gave, and later regret having given. Or, perhaps we missed saying Goodbye entirely, and find ourselves filled with guilt for seeming to be so blind or unfeeling. …If only we’d known: we could have done better, we would have done things differently!

Jesus knew we didn’t know, and that we couldn’t know. His words here in John reflect this. But, most importantly, as a result, he offers more than mere words. He promises that the Father will send a friend to help us: the Spirit of Truth, the Holy Spirit. This is something far beyond mere words. We are left with far more than just a memory of what we once treasured.

His Goodbye contains within it this great promise. The promise that all that is important to him, and them, and us, will not be lost. The relationship continues, and in fact, becomes stronger. It will now be more than just a relationship with Him, and with God. It will now also include a far deeper and stronger relationship than we’ve ever been able to have with each other. It is a gift that forever ends our isolation.

This hope is constantly being renewed through the Holy Spirit. It will not die. And because of this, the Gospel grew and flourished through those whose hearts were broken that day when he died. It still lives through us. And it lives, and will always live, through all who love him.

When relationships change, or die, saying Goodbye is hard and complex, challenging and sad. But, God has already provided a helper who will be there for us (and with us) always. The future is what really matters, not the past. We must say Goodbye, we must let go, to claim the future that has been promised to us.

And so it is here now: our time together is coming to an end. It’s been a wonderful three years; and saying Goodbye in two weeks will be hard. (I know I’ll be a teary mess!)

It’s OK. This is a good thing.  Because if we do not say goodbye, we’d be ending our journey in another way.  We’d be unable to move forward into the future God has promised us.

Saying Goodbye recognizes that something we value, something essential to who we are now, is ending. It means that we are ready for the new chapter in our lives that is beginning. Goodbye means saying Hello to our future.