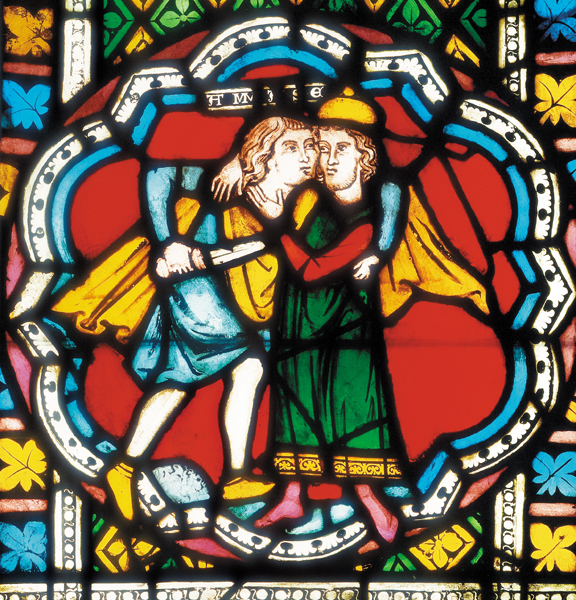 In 1 Kings chapter 2, the Hebrew Bible speaks of the bloody purge commanded by  King Solomon at the start of his reign.  One of the young King’s targets was Joab.

Joab had been David’s most capable commander: ruthless, zealous, and without an ounce of compassion.  He seemed to be intensely loyal to the Monarchy, but that did not necessarily mean he was blindly obedient to the King.  For instance, a few years earlier he had killed David’s rebellious son, Absalom against David’s wishes; and he killed a rival (and his own cousin) Amasa, whom David had appointed to replace Joab.  Finally, when David died, Joab made the mistake of supporting  a rival claimant to the throne, David’s son Adonijah, instead of David’s [apparent] choice, Solomon.  Not a nice guy, to say the least!

Once he became aware that a purge was taking place, Joab fled to the Tent of the Ark of the Tabernacle, claiming Sanctuary as others had done before him – including David himself.  Upon hearing this, Solomon ordered his new General to kill him anyway; and so Benaiah went into the Temple and slaughtered Joab there.

In my little New England hometown of Lincoln, Massachusetts, this very question is on the ballot in this coming weekend’s Town Meeting: shall we as a town adopt a resolution declaring we are a “Welcoming, Safe Town which resolves to make all residents, workers and visitors feel safe and secure regardless of immigration status.”

The central legal point of this resolution is that “Massachusetts law provides no authority for Massachusetts court officers to arrest and hold an individual solely on the basis of a Federal civil immigration detainer, beyond the time that the individual would otherwise be entitled to be released from State custody.”  But the larger issue is one of compassion.  We must ask the question of whether it is our moral obligation to separate an individual from their friends, their job, even their family, just because they are not a “legal” resident of this country.

Many or most of these folks have been in this country for a long time.  They are law abiding citizens.  They have well established lives here and are productive members of society.  Often, they are here because they fled famine, hopelessness and/or oppression in their homelands.  They are here because they see this country as a place where their hope for a better, safer, life can take root and grow.  They believe that in this country they will be able to be contributors to our economy and our society, and that they’ll be safe.  These people are not Joabs.  They are not ruthless criminals, or even criminals at all.

Right now our immigration system is badly in need of reform.  It allows employers to take advantage of “illegal” immigrant workers without consequence.  It allows the government to take a loving, law abiding parent away from their children and loved ones.  It can jail them for years, or send them far away: often to a land they haven’t seen in decades, and which they may have no memory of at all.  A land where they will not thrive and in many cases are likely to die.

We cannot allow this.  Christ’s Second Great Commandment demands that we love our neighbors.  There are no qualifiers or prerequisites to that statement.  We are not allowed to judge whether they should be here, nor prejudge whether they are worthy of our help.  We must help them, we must allow them to live the fruitful, peaceful lives they are attempting to build for themselves here in this country.

Yes, the issue of immigration must be resolved, but we cannot start with simply expelling those who are in apparent violation of what we all acknowledge is an unjust and broken system.  They are the victims of injustice, and deporting them merely magnifies that injustice.   Doing so makes us part of the evil that is destroying their lives.

So, we must start by fixing the law itself.  These human beings and their families should not be paying the price for the complacency and failures of our leaders and representatives in Washington DC; leaders and elected representatives who are responsible to us for their inaction.  Ultimately, since we elected them, we must bear the responsibility for our own failure to act.  It is our fault, not that of those seeking refuge among us.  To allow them to be arrested and perhaps deported for no crime other than seeking to make a life for themselves among us means we are rejecting the commands and Love of Christ.

We must support them, and reject the injustices being inflicted upon them.  We must resist our current government’s efforts to deport those who are innocent of any wrongdoing other than simply being here.  And, we must demand that our elected officials fix this immigration system that has allowed if not encouraged the current situation.