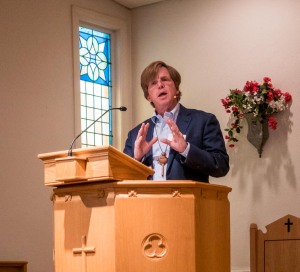 Let us pray…  …  Lord God, may your peace and Holy Spirit fill this place.  Open your scriptures to us, and may I clearly communicate what you intend us to receive. May your Word take root and flourish within each and every one of us, and through it may we be strengthened and transformed by your unconditional, living, and limitless love for each and every one of your children.  In Jesus Name, Amen.

This morning’s reading about the tormented Gerasene, a Gentile, is the second in an arc of three stories in Luke.  In the first story Jesus calms the waters: showing he is Master over Storms and Nature.  In the last story, Luke tells us of the resurrection of Jairus’s daughter, showing that Jesus is Master over Sickness and Death.

In this, the second story, Jesus is Master of Demons.  But, what are these demons?  Are they real? Or, are they a metaphor for something else?

In this story, the man is seen with no clothes, no home, not even his own will.  He is unclean by every measure of judging “uncleanness” the audience knows of. He doesn’t have any community or friends.  He’s alone, in a sort of living death, as outcast as any outcast can be.

One thing I love and respect about this congregation is how we are determined to welcome all.  We love all, affirm all, no matter who they are, no matter who they love, no matter where they’re from, and no matter what form of The Divine they pray to (if any).  We welcome The Other no matter how “Other” they are.  We recognize that we are all “Other” – that we all need God’s Love, Grace, and Affirmation.  Your example in this has inspired and guided me ever since I was a student minister here.

As we’ve already seen, this man is as “other” as they come.

But this man once had a place.  He’s from Gerasa.  I imagine he had family and friends there: people who loved him, who wanted to protect and help him.  If they hadn’t cared, they would have thrown him out of the town’s gates long ago, telling him to never return.

Instead we’re told they tried many times to help him. They tried to control him, they tried to make him conform to what they knew was best for him.  They used chains and shackles to force him to behave as they thought he should.  …And they failed: time after time he broke free and escaped into the wilderness.  He rejected them as much as they rejected him.  This is an old story.  How many of us have seen or experienced this same story, in different ways, firsthand?

Who labelled him as “possessed by demons,” and why? Was he broken by demons within, or by demons imposed from without?  What is a demon?

It’s become too easy to dismiss or hurt others through the use of labels.  We get slapped with a label (“Snowflake”, “Redneck”), then condemned or abused for being that label. Yet, the other knows nothing about us beyond the label they’ve imposed upon us through their Facebook meme.

What are they condemning?  A label, not us!  They’re investing a lot of emotion and energy into hating a phantom of their own creation.  They’ve created a demon.  A demon that possesses both its creator and often their intended victim.  They become a prisoner, as Don Henley sings, of their own device.

If a label is imposed often enough and for long enough, we will all believe it – as the Gerasene appears to have done. I’m not just saying that: research shows that those who are repeatedly told they are “less than” – for whatever reason and no matter what evidence there is to the contrary – will eventually believe it.  They will – often unknowingly – accept a false judgment as valid.  Our subconscious minds will buy into the lies, just as the Gerasene’s did.  Demons can afflict anyone.

We all label people and things – it’s perfectly reasonable and natural!  If we can label something then we can “deal with it”: naming it gives us a way to understand and control it (which is why Jews do not name God).  What’s more, not having a good label or name for something is unsettling to us.  We feel as if we don’t know it, that we cannot control it.  It is therefore dangerous.  The Gerasene is described as being beyond control.  Was he simply not being heard, not understood?

Before the advent of modern science and psychology, those with certain types of illness were described as “being possessed.” It was the label used when no other label fit.  The people had no other way of explaining what this person was, and why they acted as they did.  So, in their judgment, he was a Demonaic: possessed by demons.

And that’s where they got stuck.  No matter how hard they tried, they could not control or understand or help this man.  So, they gave him a label that meant he was beyond help, not someone who could remain among them as he was, anymore.

As we get to know another better, we almost always find that the labels we first used to describe them are inadequate, even outright wrong.  Labels do help us to quickly and easily deal with the new, the unknown, or the partially known; but they create an illusion of uniformity or conformity: ignoring or in ignorance of the richness, depth and color, the uniqueness, that The Divine has placed in each and every living creature.  Eventually, we realize the labels we used to describe The Other are not even relevant.  We abandon them.

Labels can be a defense mechanism, distancing “The Other” from us.  Labels make it easier to dismiss, or ignore, or exclude, or oppress – or hate – others.

Labels mislead us into seeing The Other as being all of the assumptions and judgments embodied within a stereotype.  They give us the false impression that the world is simple and binary: black or white, male or female, godly or godless, well or ill.

Politicians and pundits know this well, which is why some use labels so freely when attacking others.  Their labels obscure reality.  We then see The Other only as they want us to see them.

Labelling others can deny the love that God has for all of us and can limit who we are.  They can distract us from the path that God calls us to follow.  By using labels to paint others as they are notwe distance ourselves from God; just as the people of Gerasa did to themselves through their judgment of this man. Luke even portrays them as being actively afraid of the truth of Jesus and of the Gospel and of the healing of this man.

But, they could not deny that the Son of God came to this man.  Jesus knew the man was not consumed by supernatural spirits.  He knew the man could not escape the labels and judgments placed upon him.  So, Jesus did not label him, did not judge him, did not reject him, did not control him. Jesus simply loved him, freeing the man by refusing to allow those demons to be.  They could not debase his love of the human being lying on the ground before him. And so, instead of these demons eventually sending the man into the abyss, Jesus pulled him back.  Luke tells us the demons went into the abyss of their own accord, as evil always does to itself in the end.

Near the conclusion of this narrative, Jesus commissions this man to preach the Good News to those who rejected him.  In fact, as Luke tells it, the Gospel to the Gentiles begins with this man.  A man judged as hopeless, but in whom hope was restored through the Love of God.  He understood exactly what a Demon is, and was called to show us that Demons cannot stand up to the Gospel.

The teachings of Jesus, Master of All, have been passed down to us through this man, and countless other women and men. They are like a mighty fortress that defends us from demons and evil.  Our Faith helps us see through the darkness to find that God’s presence is everywhere, even in the hearts of those who set themselves against us.  Our faith helps us love those who judge and label us.