We once invited several families with children my son’s age over for dinner. Once everyone arrived, we all went into the room where the kids were playing. But guess what, we dads saw our kids playing together with the cardboard blocks!

Well, as good fathers, we had to participate. Didn’t we? 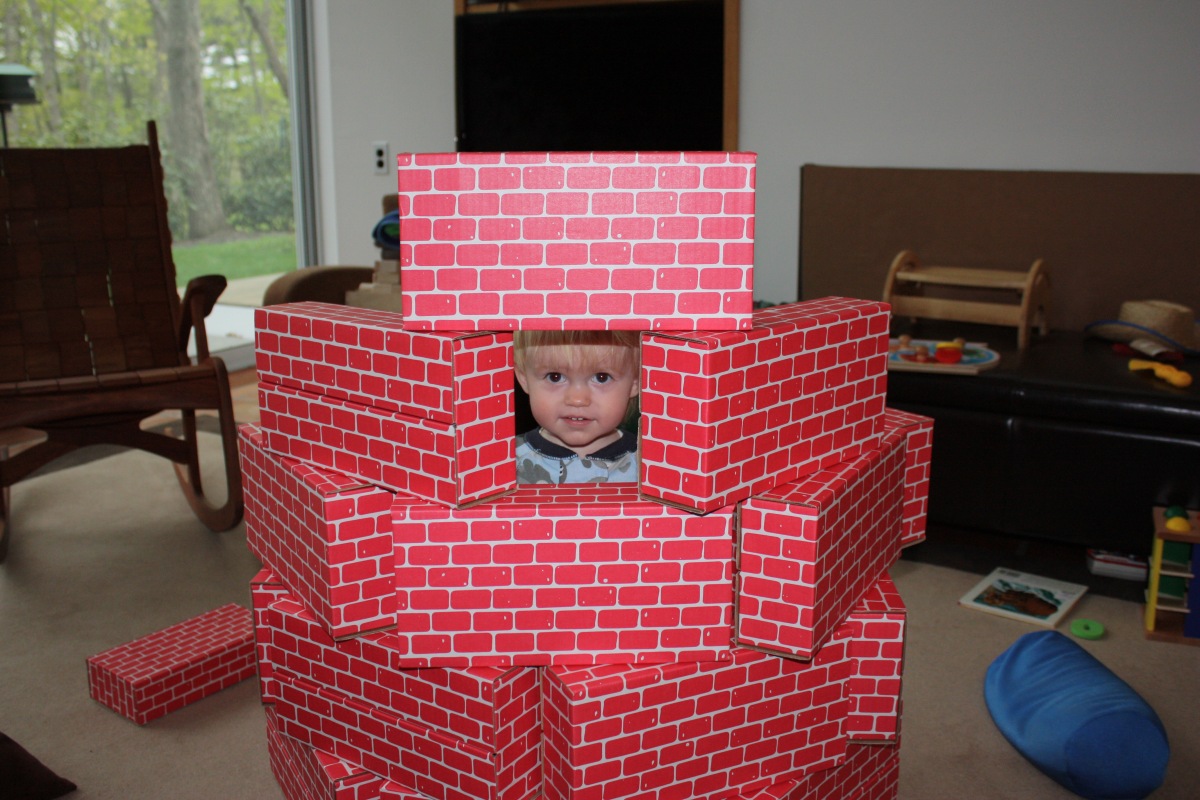 While preparing this message, I remembered that when he was younger, my son would play with big cardboard blocks.  And, once he built something, he’d often knock it down and start over, and over, and over.

When you’re two, play is not about being the biggest, nor the best, nor any other measure of success or superiority.  It’s about playing, about imagination, about stacking blocks.  It was also about playing with someone.  Blocks were a favorite pastime with Mommy and Daddy, Grandparents, and friends.

Playing with someone was fun.  Our participation – being with him in his play – was the point.  There was no goal, no purpose other than enjoy playing … together.  It was about relationship.

We once invited several families with children my son’s age over for dinner.  Once everyone arrived, we all went into the room where the kids were playing.  But guess what, we dads saw our kids playing together with the cardboard blocks!

Well, as good fathers, we had to participate.  Didn’t we?

But our play was different.  We had to build something.  We had to have a goal.  Our goal was to build the BIGGEST tower.  So, we built a HUGE tower!  We used every cardboard block.  It almost touched the ceiling, nearly twenty feet above.

Our wives held the kids back from participating.  They said they didn’t want our children to topple the tower. But, I think they were more concerned about them being trampled in all that furious Dad activity.

When the tower was done, we took pictures and congratulated ourselves.  Then, the Moms let the kids go.  … We immediately became human umbrellas, protecting our little ones from getting seriously bonked as our tower came tumbling down.  Great fun.  We laughed and went back to chatting.  Our children began building towers themselves, in imitation of what their Fathers had done.

This desire to be with, rather than to achieve, is an important point of the story of the Golden Calf.

The children had no interest in building big towers, until we did it.  They simply enjoyed the process.  They enjoyed doing it together.

But we wanted to build the BIGGEST tower we could – a goal.  Once we finished, we were proud of our accomplishment.  (It was a REALLY BIG TOWER!)  We knew how to compete.  Something they had not yet learned.  In fact, our competitiveness prevented our own children from participating.

As we grow up we learn to value being praised for being the best, or doing the best, or having the best.  We learn to crave praise.  Our wives (knowing their husbands all too well) praised us for building the BIGGEST tower.   They understood that our tower reflected us.  We were the best because we built the biggest.  We were really good tower builders!

We all learn to set and achieve goals for ourselves, and to own them.  We learn to say “I did that” or “I own that” or “I am that.”  We want to be (or have) the biggest, the best, the fastest.

There is nothing wrong with this.  It’s very human.  It is one of the ways we define who we are to ourselves and to others.

But sometimes we desire something because in some way we think it will magnify or justify our identity, rather than just defining it.  When that line is crossed, a line we rarely (if ever) see at the time, we have made an idol of ourselves: the most pernicious idol of all.

Any idol, … ANY IDOL, … is ultimately about us.  Anything we seek to possess as our own – whether it is a thing, or a prize, or the truth – becomes an idol when owning it or controlling it magnifies, or justifies, our sense of self-worth, our position or our status in the world.

An idol doesn’t make demands.  It is something you control.  You decide what will be done with it.  In fact, making a sacrifice to an idol is in itself an attempt to impose control.  A sacrifice includes a request for a favor in return, as it certainly was in the case of the Golden Calf.  The Jews well knew how their former masters sacrificed to their own gods.  A sacrifice is a transaction.  An idol’s survival depends on its ability to fulfill its part of the bargain.

The Golden Calf was built for the people to bestow gifts and sacrifices upon.  They expected a return on their investment.  But, as they were soon to learn, God would have none of it.

This is why the God of Moses has no name, has no likenesses, and tolerates no competitors.  Without a name, and without an idol, our God is a god we cannot possess or control.  Without competitors, we have no alternatives to ply with sacrifices.  There is no other divine figure to play favorites with.

God gave us Creation.  God gave us the ability to choose.  God gave the Hebrews their freedom and a new land. God gave the World that only child.  It was not a transaction.  God is about giving – not owning; about freedom – not control; about growth – not constraint; about grace – not debts, about our journey with each other in relationship.  That relationship is not about us owning God, nor about God owning us. God is not our idol.

Author Anne Lamott famously said “The opposite of faith is not doubt: It is certainty.”  But we often omit the rest of what she said: “It is madness. You can tell you have created God in your own image when it turns out that he or she hates all the same people you do.”

Let’s think on this for a moment.

If we have certainty, if there is no doubt, then where is faith?  Without doubt, Faith is irrelevant.  It cannot operate where certainty exists.  And so, we turn to idols because we believe they will provide certainty in this uncertain world.  An idol extinguishes faith, substituting in its place a tool to do our bidding.  An idol eliminates the need to listen for the voice of God within us, or in those around us – instead we tell the god what we want.  God is no longer here with us, but external to us, removed from us – high up in a temple on a hill somewhere far away – inaccessible.  With an idol, our relationships with others no longer reflect God, they reflect us.

An idol makes everything all about us.  There is no reason to listen to God or The Other.  An idol will not help us change or grow.  We become self-justified, self-righteous, stagnant.  A swamp of self-sufficiency.  We ignore what the very first chapter of Matthew tells us, that Jesus is Immanuel – God with Us – the God who walks at our side throughout life.

It is our relationship and participation in this journey of faith with each other and with God that matters.  Just like when we are with our own children.  Being in relationship with God and with our neighbors means we are open to changing and growing with them.  We don’t control them.   They don’t control us.

True relationships are two-way.  A one-way relationship is slavery, as the Jews knew too well.  Moses’ conversation with God, at the end of our reading from Exodus shows us that relationship requires listening and response, a lesson the Jews had yet to learn.  God listened to Moses, and responded.  God changed the plan because of Moses’ plea.  And so we know that God listens to us, and changes, just as we are called to listen to God, and to each other, and so be changed ourselves.

The First Commandment, written with the finger of God on those stone tablets that Moses lugged down from that mountain was the first of the ten for a reason.  In part, I believe it is because God wants to participate in the lives of the Children of God.  Not to be idolized by us, not to enslave us.  And so, one lesson to learn from the story of the Golden Calf is that we are called to participate in our path through life with God, and with all of our neighbors.  For, that is where God can always be found.

Scripture Reading: Exodus 32:1-14 (The Story of the Golden Calf)