Recently, Dr. Michelle A. Cretella, MD of the American College of Pediatricians wrote a letter to the organization “District 211 Parents for Privacy” (in Illinois).  That letter was published on the group’s Facebook page, and I include it here (click on the images below to read that letter): 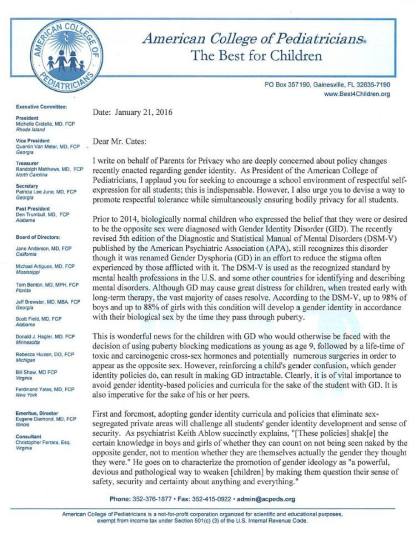 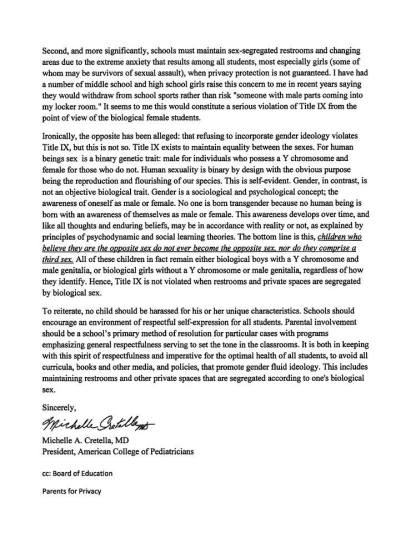 Despite its name, the “American College of Pediatricians” is a small (<200 member) group that broke away from the 60,000 member American Academy of Pediatrics in 2002; and so is far from representative of the opinions of the Pediatric profession as a whole.

A key statement in Dr. Cretella’s letter is this: “No one is born transgender because no human being is born with an awareness of themselves of being male or female.”

What IS true is that by the time a human being becomes aware of (or develops) a gender identity, let alone a sexual orientation, it is extraordinarily difficult to change, if it can be changed at all: research strongly indicates that it really cannot be changed; and has convincingly demonstrated that attempting to reorient someone in such a situation causes far more harm than good.

I know children who are transgender, and I see their parents anguishing over how to help their child deal with the many issues that arise because of it, and I see them having to defend their child when they are hurt by the unthinking and judgmental actions or words of others. It is not a path any parent, let alone their child, pursues willingly.  What is clear is that Dr. Cretella’s proposed solutions have done more harm than good in the past, and there is no reason to believe that will change.

What is being wrestled with by school systems and many other groups across this nation is not whether to promote a “gender-fluid ideology” or not, as Dr. Cretella claims.  There is no such ideology, unless one believes that our growing awareness that gender identity is not exclusively either female or male, and not in lockstep with physical gender, is an ideology.  Rather, the challenge is how to respond to this growing awareness that there is a spectrum of gender identity (just as there is a spectrum of physical gender, and a spectrum of sexual orientation) in a compassionate and respectful way.

If we are to treat persons we encounter who are not “fully male” or “fully female” (as we imagine they should be) with compassion and respect, then we must first understand and accept that our belief that anyone is either “fully male” or “fully female” is a mistaken social construct or assumption, not a concrete and unchanging reality.  Changing our own assumptions is where we must begin if we are to come to grips with this difficult and troubling challenge: changing “the other,” especially children who are struggling with their sexuality even before they are fully aware of what it is, is not an option.

Copyright (c) 2016, Allen Vander Meulen III, all rights reserved.  I’m happy to share my writings with you, as long as proper credit for my authorship is given. (e.g., via a credit that gives my full name and/or provides a link back to this site – or just email me and ask!)