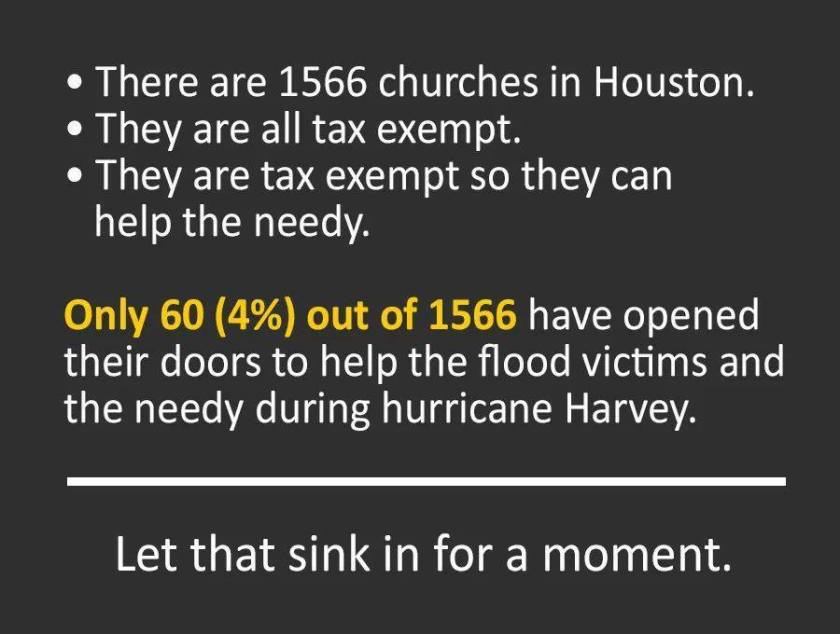 Even if the claims it makes were accurate (which I highly doubt: given the unsettled conditions in Houston, how would you find and verify such information?), most churches do not have the resources to do much by themselves, especially on short term notice – they tend to rely on their denominations to do the heavy lifting in such cases.  Their parent organizations have the trained staff and dedicated resources (and fundraising capabilities) needed to support such work.  Local churches don’t.
There are definitely a number of denominations, including my own – the UCC – that are ramping up major support efforts, with the intent (and proven track record) of being there and staying there to help folks rebuild, years after the news cameras and social networking site feeds have forgotten about them and their needs.
For more information on what the UCC is doing, read this article on their website:
http://www.ucc.org/news_hurricane_harvey_prompts_ucc_emergency_appeal_for_long_term_recovery_08282017
Also, here is a blog post about what the ELCA is doing in the area…
https://bishopmike.com/2017/08/29/congregations-impacted-by-hurricane-harvey/
Churches that are part of the Cooperative Baptist Fellowship are also setting up a long term relief effort…
https://cbfblog.com/2017/09/01/cbf-establishes-houston-headquarters-for-long-term-harvey-relief-efforts/

Yesterday while I was leading my Church’s Worship Service, a member of our congregation asked me (during our “announcements time”) what I thought of the UCC’s recent letter to Talladega College, a historically Black College in Alabama that has been rebuilding itself after nearly failing a few years ago.  This letter challenges the school’s decision to allow their marching band appear in the Inauguration Parade in Washington DC on January 20th.  It seemed fitting to publish my thoughts here; expanding on the response I gave to her question.

Now, clearly the school’s decision is very controversial, given the incoming administration’s abysmal track record (to date) when it comes to social justice issues and policies.  However, Talladega College’s President, Dr. Billy C. Hawkins, defended the school’s decision saying: “We respect and appreciate how our students and alumni feel about our participation in this parade, … As many of those who chose to participate in the parade have said, we feel the inauguration of a new president is not a political event but a civil ceremony celebrating the transfer of power.”

In response to the college’s announcement, the leadership of the United Church of Christ, my own denomination, and which has been a supporter of Talladega College, sent a letter to the school questioning this decision and asking that they reconsider.  Several alumni of the school have expressed similar concerns.

This is an old, old argument: a new phase in the long battle between those in the Black Community who advocate a more accommodating approach in confronting racism and injustice in this country; and those who favor a more confrontive approach.  Both approaches are valid, and are part of a toolkit that encompasses a wide range of possible responses to racism and injustice that can (and should) be deployed.  (Though which is most appropriate depends upon the particular situation.)

I cannot speak to the specifics of this situation: I was not party to the decision process at Talladega, and have not seen the text of the UCC’s letter to the school.  However, I am deeply concerned by the UCC’s actions here.  What I do know is that Dr. Hawkins is no lightweight, and no stranger to tough challenges; and that we cannot dismiss his school’s decision, or reasoning, lightly.

END_OF_DOCUMENT_TOKEN_TO_BE_REPLACED

Such signs say far more about the persons holding them than they do about their intended target. Expressing God’s love in ways these people and I can both agree on is a difficult challenge, because it requires that I be just as open to being changed by that love as I hope they will be. It would be far easier, and less challenging to my own peace of mind, to simply shut the door to relationship by dismissing such people as not worth listening to – which is what those signs are attempting to do in terms of their bearers’ relationship with me – and our President – after all… 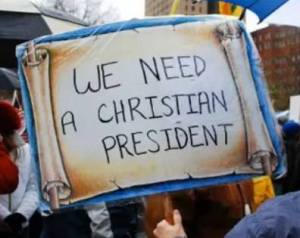 Like you, I’ve seen signs like this posted by relatively conservative groups and individuals on social media and elsewhere. While I understand the impetus behind such signs, that I understand does not imply that I agree with them – far from it!

For one thing, we must remember that our President IS a Christian.  Until shortly before his election to the Presidency, he and his entire family regularly attended worship at Trinity United Church of Christ in Chicago, one of the largest and most dynamic churches within my own denomination.  In fact, more than a quarter of a century ago, our future President made a conscious decision to become a Christian when he joined that church after being, as he put it, a “religious skeptic” for many years.  (One should also note that Trinity Church’s motto is “Unashamedly Black and Unapologetically Christian.” …And as an organization serving a community deeply and continuously affected by racism and injustice in this society, how can their motto be otherwise?)

Now, I am a Minister in the tradition of the United Church of Christ (UCC), and for over three centuries members of my family and our ancestors have been faithful members of a church that is now part of this same Protestant Denomination that Barack Obama chose to become a member of at age 26.  Obama is one of three presidents who were affiliated with this same religious tradition that the UCC descends from (Congregationalism) at some point in their lives.  So, I see signs such as this being evidence that their bearer does not believe I am a Christian, either.

END_OF_DOCUMENT_TOKEN_TO_BE_REPLACED

Being faithful isn’t about being skilled or perfect at anything. It’s about showing up. That’s all that God asks us to do – show up, and you’ll find that God is there too: showing us the way, impelling us to speak or act as needs to be done, helping us to learn what we need to learn, and providing the grace for those we encounter to rejoice in our presence and willingness to stand with them, no matter how clumsy we feel we might be.

During this past Sunday’s “Open and Affirming Forum” at ARK Church our guests related some of their own experiences to help us better understand the pain and alienation that many transsexuals encounter every day, and also provided a great deal of information to help us be more sensitive, compassionate and affirming when dealing with anyone who is “other” – especially those in the LGBTQ communities. Our eyes were opened to the challenges of being someone who doesn’t fit into the neat (and very binary) categories of “male” or “female” or “opposite sex loving” or “same sex loving.” It was a moving, growing (and humbling) experience.

The leader of the forum said something near the end of the meeting that has stuck with me all week: “just show up.”